There is a common thread among truly great, champion drivers. Every serious racing driver wants to be the best at their craft, but the champions are consumed by maximising every element in the game of motorsport and finding an edge that few others can compete with.

In the history of Australian motor racing, John McCormack is classed as one of those champions. He is a three-time Australian Champion Driver and one of the most prolific race winners of the F5000 era – honours which he earnt through tactical professionalism as well as obvious natural talent.

Intelligent, determined and a deep thinker, ‘Supermac’ raced with the touch of a perfectionist. In an era when reliability could best be described as unpredictable, the cerebral McCormack’s edge was technical proficiency and he drove with brake wear, clean gear changes and the rev gauge in mind. He was quick enough for numerous pole positions, but often preferred to spend practice and qualifying focussing on long run pace and tyre management.

He was a brilliant development driver that saw the long game. McCormack and Garrie Cooper, founder of Elfin Sports Cars, forged an excellent partnership which took Elfin from the challengers of F5000 to its standard setter in a matter of seasons.

McCormack was one of the most complete drivers of his era and his mechanical understanding was rounded out by commercial acumen. He was pivotal in forming the iconic Ansett Team Elfin partnership and enjoyed relationships with brands such as BP, Budget Rent-A-Car and Unipart.

He is also well-known for racing and developing one of Australia’s most legendary Sports Sedans, the ground-breaking, F5000-based Ansett Valiant Charger.

Born in the Tasmanian port city of Burnie in 1938, McCormack had his first taste of racing – albeit without an engine – when he won the local Apex club’s soap box derby at the age of 12. Many years later, he stepped up to the real thing with a supercharged Nota Formula Junior.

McCormack then purchased an ex-Jack Brabham BT4 Climax with which he won multiple Tasmanian Racing Car Championships in the late 1960s, before moving his young family to Adelaide with the hopes of establishing a professional career. By 1971, McCormack purchased the first Elfin MR5 F5000 to form a two-car Ansett Team Elfin alongside Cooper.

The project began auspiciously when McCormack took the MR5 to second on debut at the Sandown round of the Australian Drivers’ Championship behind Kevin Bartlett’s McLaren, despite the car only being completed days before the race. The season ended with victory on Elfin’s home turf at Mallala and fourth in the Gold Star standings.

Another ‘home’ win – this time for McCormack at Symmons Plains – was the highlight of the 1972 season before the McCormack/Elfin partnership hit its zenith in 1973 as a three-year development program of the Repco Holden-powered MR5 paid dividends.

McCormack opened the year with possibly his greatest ever drive – victory in the New Zealand Grand Prix at Pukekohe. From third on the grid, McCormack capitalised on a rare incident for Frank Matich and charged past Graham McRae to build a convincing lead.

A peerless performance was cruelly threatened by the loss of third gear late in the race, but the determined Elfin driver found a way to manipulate his ailing machine in the closing stages and hold out fast-closing Englishman, Alan Rollinson, to win the Grand Prix by less than a second.

Second in the Tasman Series over summer would be topped by the first of three Gold Star titles for McCormack, with race wins at Surfers Paradise and Adelaide. A golden year very nearly yielded an Australian Grand Prix win as well.

McCormack led the AGP at Sandown from pole position but was faced with three challenges – intermittent rain, the speed of rival Graham McRae and a broken suspension bolt which compromised his MR5’s handling. He and McRae traded the lead four times in a thrilling battle, with the Kiwi prevailing by mere tenths at the finish.

McCormack built on his stellar 1973 with a second NZGP victory the following year – this time on the Wigram airfield circuit in dominant fashion from international aces Teddy Pilette and Peter Gethin.

A new MR6/ML6 design was introduced for the Australian season in 1974 featuring a Leyland V8 engine which was derived from the Leyland P76 road car. The leftfield choice of engine was smaller and lighter than the ubiquitous Chevrolet and Holden motors, but lacked horsepower and was blighted by unreliability.

A return to the proven Repco Holden engine for 1975 brought McCormack back to form and he won his second Australian Drivers’ Championship, but the Tasmanian took a bold new direction in 1976.

McCormack’s long and successful partnership with Elfin ended after the ’76 Tasman Series, and he went his own way by sourcing an ex-Formula 1 McLaren M23 chassis which was mated to the Leyland engine that McCormack still saw potential in.

The M23 had great provenance as the car that Peter Revson and Jody Scheckter raced in the 1973 Formula 1 season, and that Revson drove to win the British Grand Prix. Typical of McCormack’s astute engineering mind, the Leyland was chosen as it was an alloy block rather than the heavier iron blocks common in F5000, and what it gave away in power was offset by better mid-range torque and weight distribution – traits which suited the superior dynamics of the Formula 1 chassis. The Leyland engine was also of a similar weight to the Cosworth DFV that the M23 was built for. 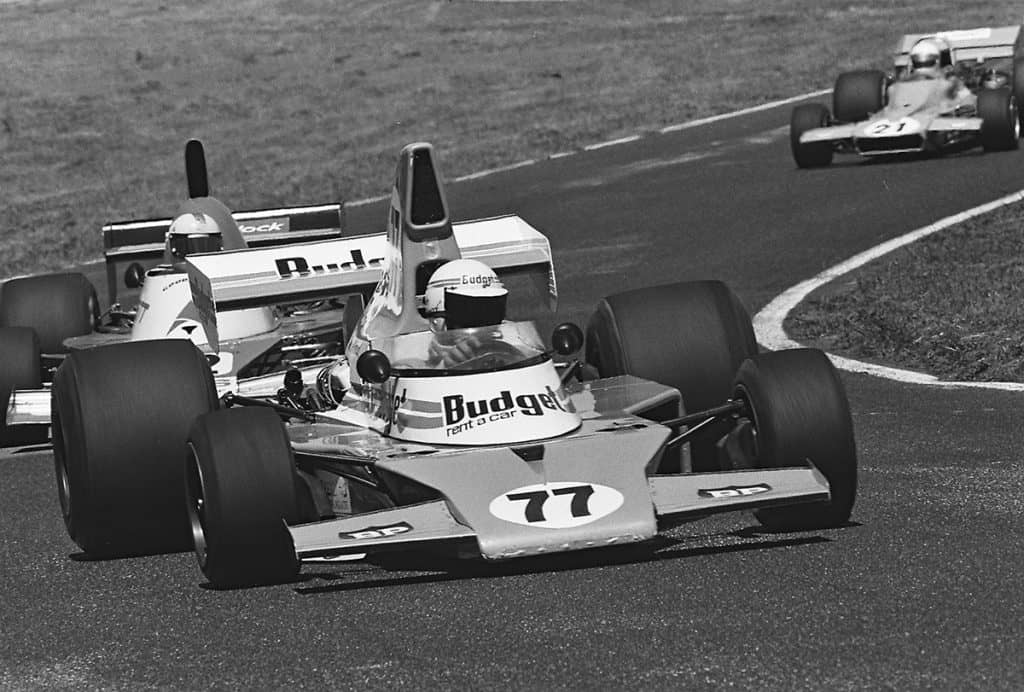 With the expertise of Repco-Brabham engineer Phil Irving and backing from the Budget car rental brand, McCormack debuted the M23 at Oran Park in 1976 and showed promising speed until a valve failed during the race. On its second appearance at Calder, the M23 became a winner and McCormack’s ‘outside the square’ philosophy was vindicated.

McCormack drove the McLaren to his third Gold Star in 1977, clinching the title in an incredible finale at Phillip Island where in a short four-round season, seven drivers entered with a mathematical chance of winning the championship. The agile M23 was in a class of its own on the high-speed Island circuit, and McCormack looked to have one hand on the prize when closest title rival Alfredo Costanzo was sidelined with engine issues.

That was until McCormack himself was slowed by a blown head gasket, which sent the race leader into the pits and tumbling down the order as mechanics tried desperately to effect repairs. Miraculously, they push-started the McLaren to limp over the line and collect enough points for McCormack to secure the championship.

McCormack’s commitment to the Leyland engine also brought with it commercial upside, as automotive parts distributor Unipart – owned by the British Leyland parent company – became the major sponsor of McCormack’s racing program in 1978 and 1979, his final years of racing in F5000. The Unipart livery that McCormack last raced in F5000 has been recreated for our S5000 heritage concept.

Following time in Can-Am and Sports Sedan racing, McCormack’s legendary career came to a sad end as a result of injuries sustained in a road accident travelling to the 1980 Australian Grand Prix at Calder – which McCormack was to have raced the M23 in. McCormack and his mechanic (who was driving at the time) were crossing rural South Australia when fatigue caused a collision with a tree. 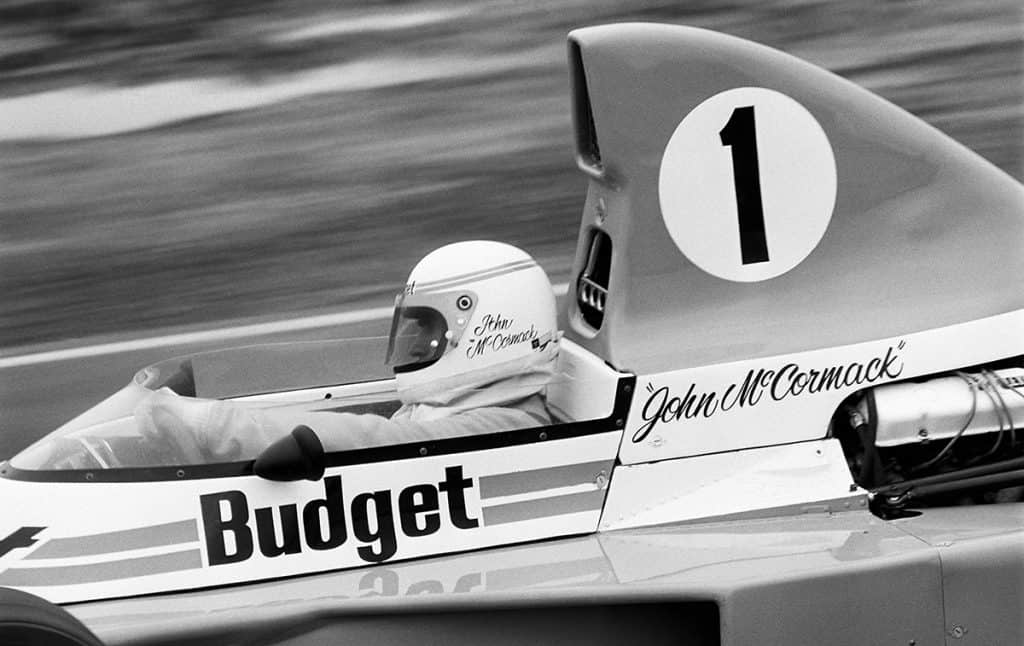