It can be said that Graeme Lawrence lived the dream in motor racing.

How else do you describe the journey of a Kiwi who started racing in a Humber saloon car in his late teens, was thrust from the local scene to European open wheel racing with McLaren, raced with legends such as Jim Clark and won the Tasman Series in a Ferrari with the support of ‘il Commendatore’ himself?

The ebullient Lawrence achieved all that and more, and he had a ball while doing so. Opportunities presented themselves, but Lawrence threw himself at realising them with the boundless enthusiasm and commitment of a young man who simply loved racing.

Like many of his contemporaries in the 1960s and ‘70s, motor racing was a serious pursuit for Lawrence, but not at the expense of enjoyment and genuine camaraderie among his competitors. 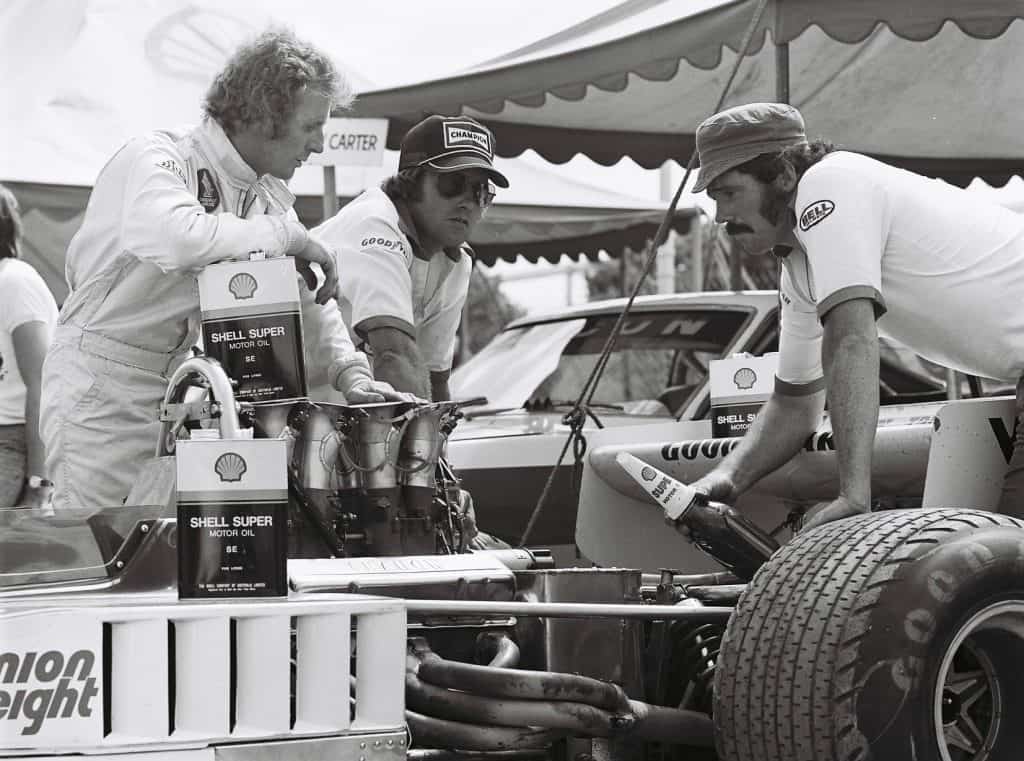 To this day, the likeable knockabout they call ‘Shag’ remains lifelong friends with the likes of Kevin Bartlett, Warwick Brown, Bruce Allison and his compatriot and motor racing ‘blood brother’, Ken Smith.

Born in Whanganui on Christmas Day in 1940, Lawrence was exposed to motor racing by his father Doug who was a car dealer and motoring enthusiast. The senior Lawrence competed in saloon car races on the Ohakea Air Force Base, where Graeme would later begin racing a Humber 80 as a teenager.

Some years passed before Lawrence stepped into a ‘proper’ racing car – a 1600cc Brabham BT6 open wheeler – at the age of 24. Three years later, Lawrence became champion in New Zealand’s National 1.5 Litre formula and a race winner in the NZ Gold Star.

The turning point in Lawrence’s career came in 1968 when he sold his trusty but ageing Brabham and began the hunt for what he saw as ‘the car to have’ – a McLaren M4A Formula 2. A phone call was made to Bruce McLaren, a friend from Lawrence’s school days, with the intent of securing an M4A that Lawrence could race in the NZ Gold Star.

But McLaren had bigger and better ideas for his fellow Kiwi, and instead offered Lawrence the opportunity to race for his eponymous team in the European Formula 2 Championship. The deal was contingent on Lawrence supplying a 1600cc Cosworth FVA engine and a mechanic, such was the currency in 1960s motor racing.

A stunned Lawrence jumped at the opportunity, and in 1968 he was on the grid with names he had previously only read about in the motor racing magazines. McLaren, Ferrari, Lotus and Matra all ran works entries in Formula 2 alongside programs in Grand Prix racing, and the likes of Jim Clark, Graham Hill, John Surtees, Jackie Stewart and Jochen Rindt made appearances against Europe’s up and comers of the era.

Lawrence was competing in the fateful race at Hockenheim in which Clark lost his life and spent race morning in the company of the legendary Scotsman. Lawrence will expand further on this event in Part 2 of our S5000 Heritage Series feature.

Unfortunately, the F2 campaign was short-lived as McLaren struggled for competitiveness and installed veteran Frank Gardner in Lawrence’s seat, but Bruce kept his friend in the team’s fold and allowed Lawrence to build and engineer an F2-spec M4A chassis to race in New Zealand and Asia.

Another of Lawrence’s Kiwi allies in Formula 1, Chris Amon, was the conduit to the next defining moment in his career. Amon spent three seasons racing for Scuderia Ferrari and won the Tasman Series in 1969 driving the Ferrari Dino 246 T (T for Tasmania), an F2-specification Ferrari which was adapted for the larger-engine Tasman formula.

Amon left Ferrari at the end of 1969 and Lawrence – having raced in the Tasman Series that his fellow Kiwi dominated – boldly asked Amon if Ferrari would consider selling or leasing the 246 T. Amon leant on his relationship with the Scuderia to make the request, and to Lawrence’s amazement a telegram direct from Enzo Ferrari confirmed that the car could be made available.

After selling his McLaren and negotiating sponsorship deals with Shell and Air New Zealand, Lawrence scraped together the budget to bring the 246 T to New Zealand and debuted his stunning acquisition in the 1970 Tasman Series, winning the opening round at Levin and ultimately the series. 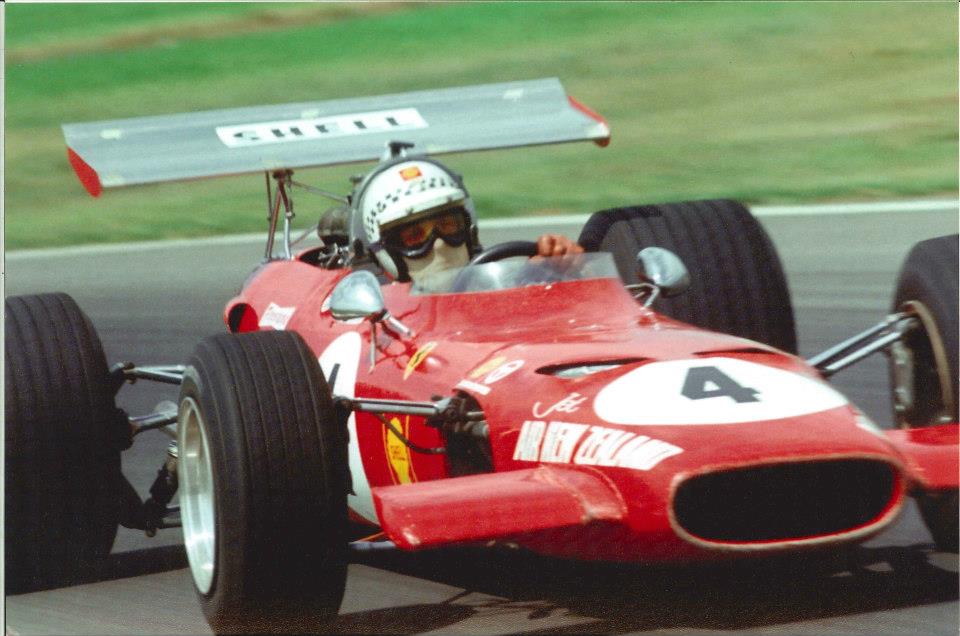 Lawrence’s successes were observed by Enzo Ferrari, who personally congratulated the New Zealander via direct telegram after his Levin victory – the first for Ferrari in the 1970 season.

Lawrence also drove the 246 T to win the 1970/71 New Zealand Gold Star Championship and the 1970 Singapore Grand Prix, which was Lawrence’s third title on the Thomson Road street circuit.

In the early 1970s, the newer and more powerful Formula 5000s superseded the smaller-capacity Tasman formula. Deciding that “if you can’t beat them, join them”, Lawrence and his father purchased a Lola T300-Chevrolet.

Sadly, Lawrence was involved in a serious incident during the 1972 New Zealand Grand Prix at Pukekohe which claimed the life of competitor, Bryan Faloon. Lawrence had been battling with John McCormack along Pukekohe’s back straight when Faloon – in a slower car – and Lawrence made contact at high speed.

Lawrence survived the incident, but sustained a broken arm, broken leg and head injuries after his car cleared the trackside barrier and struck a train parked on the railway line adjacent to the circuit. The incident left Lawrence in hospital for much of 1972, and in plaster for almost a year.

After a long recovery period that included a return to racing in less powerful machinery, Lawrence went on to win his second NZ Gold Star title in 1974/75 – his first in an F5000 – driving a Lola T332-Chevrolet with the backing of Marlboro and Singapore Airlines. The colours of this car have provided the inspiration for our S5000 tribute livery to Lawrence. 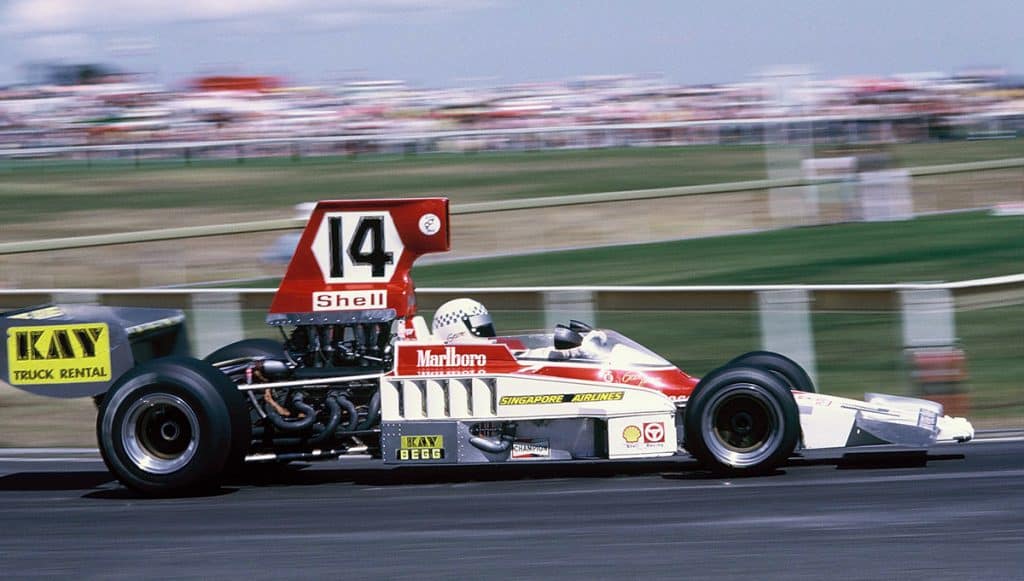 He was unlucky not to win a second Tasman Series in 1975, which he led into the final round at Sandown. A failed fuel metering unit sidelined Lawrence in the race, which allowed rival Warwick Brown (also wounded with mechanical issues of his own) to snare the title by a solitary point in a dramatic finale.

Lawrence raced in F5000 until 1977, when he retired following the death of close friend Max Stewart in a qualifying accident at Calder.

Lawrence continued racing until the early 1980s in Formula Atlantic in New Zealand and Asia, adding the Malaysian Grand Prix title in 1978 to his three victories in the Singapore Grand Prix. In 1978, Lawrence also stood on the Bathurst 1000 podium after finishing third in a Ford Falcon with Murray Carter.

Following his retirement from driving, Lawrence ran a successful team in Formula Atlantic until the mid-1990s.

Today, Lawrence remains a keen follower of motorsport and runs a rest home and hospital together with his partner, Maree, in the north island coastal town of Raglan. 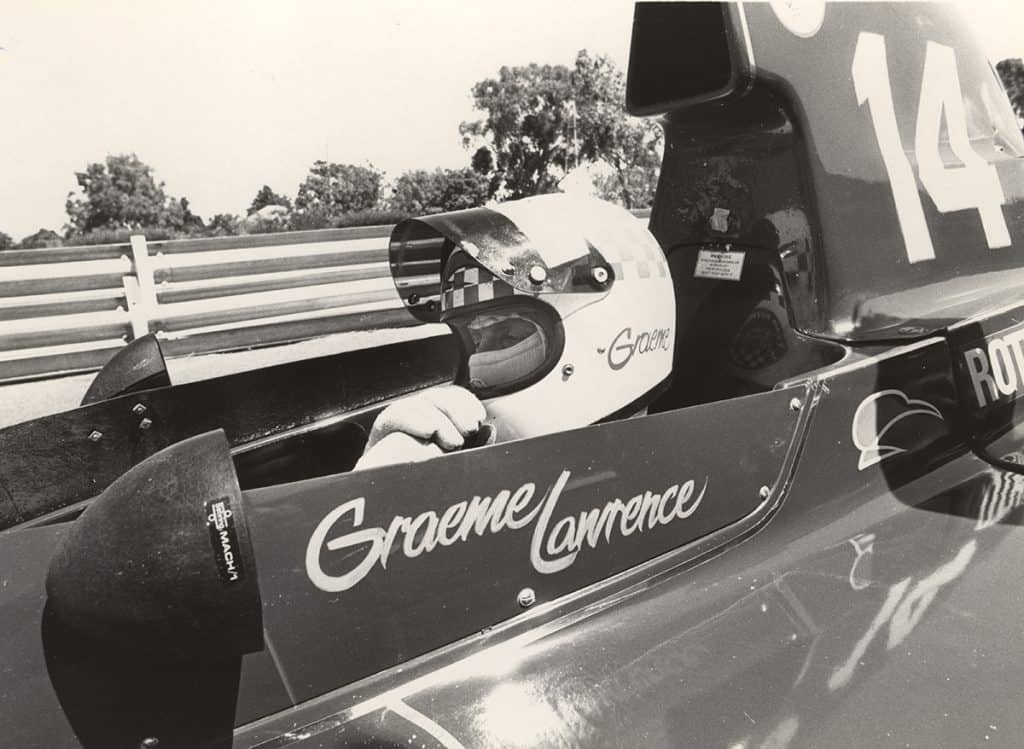