The standing of John Goss OAM as a legend of Australian motorsport is without question.

He remains the only driver to have won both the Bathurst 1000 (twice) and the Australian Grand Prix, which he did in the Formula 5000 era.

His name is redolent of 1970s Australian motor racing, an age of colour and character that the swashbuckling ‘Gossy’ epitomised so well. Alongside Allan Moffat, he was the face of Ford Motor Company’s racing program – an association immortalised by the ‘Goss Special’ Falcon muscle cars that bear his name. But there is much more to the story of John Goss.

Some may have regarded Goss as overly self-assured and certainly he was not one to back away from a microphone or camera. However, there was profound substance behind Goss’ words for he was deeply serious about motor racing and greatly respected the endeavour of ‘man and machine’ in the classical sense. Accordingly, Goss applied himself to his craft with pride and professionalism.

While Goss’ achievements in touring cars are widely documented, his life in open wheel racing is less so.

That Goss stepped outside the ‘comfort’ of racing touring cars as a household name with ample sponsorship and factory backing, to test himself in the world of Formula 5000 speaks not only for his determination but a long-harboured desire to compete at the highest levels of open wheel racing. 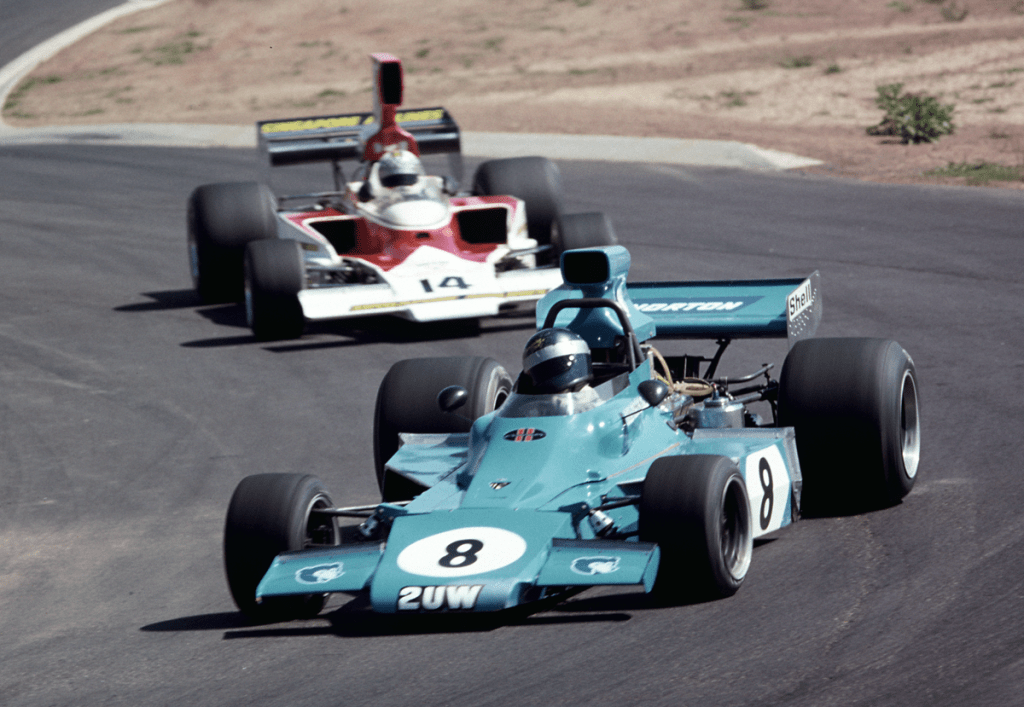 Born in the Melbourne suburb of Glen Iris in 1943, Goss grew up in Tasmania and was first exposed to motor racing when his father took him to races at the Longford road circuit, including the 1959 Australian Grand Prix which was won by Stan Jones driving a Maserati 250F.

The flame for Goss’ motor racing ambition was lit by the Formula 1 specification cars that raced at Longford, while the exquisite craftsmanship of BRMs, Coopers, Lotuses and Ferraris – which Goss observed up close as a schoolboy – piqued his interest in the engineering side of the sport and led to an apprenticeship with a Ford dealer in Tasmania.

Goss began racing in his Holden 48-215 road car at Baskerville and later Longford, before setting about building his own racecar – a Ford-powered sports prototype named Tornado, which took styling cues from the Can-Am racers of the 1960s.

With aspirations of racing in Europe and ultimately Formula 1, Goss took the first step towards his dream by venturing out of Tasmania to race on the mainland. While in Victoria for a sports car race at Winton, Goss inquisitively called into the Maidstone headquarters of Repco-Brabham Engines – a visit which resulted in a full-time job assembling and testing the engines Brabham would race in Formula 1.

Goss’ five-year stint with Repco-Brabham further enhanced his mechanical understanding and appreciation – elements which would define Goss’ approach to his own racing career.

The decision of Jack Brabham and Ron Tauranac to switch to the all-conquering Cosworth DFV engine in Formula 1 brought an end to the Repco-Brabham operation and Goss’ role, but an employment reference from Repco helped Goss land a new job with another legendary Australian driver-constructor, Frank Matich. 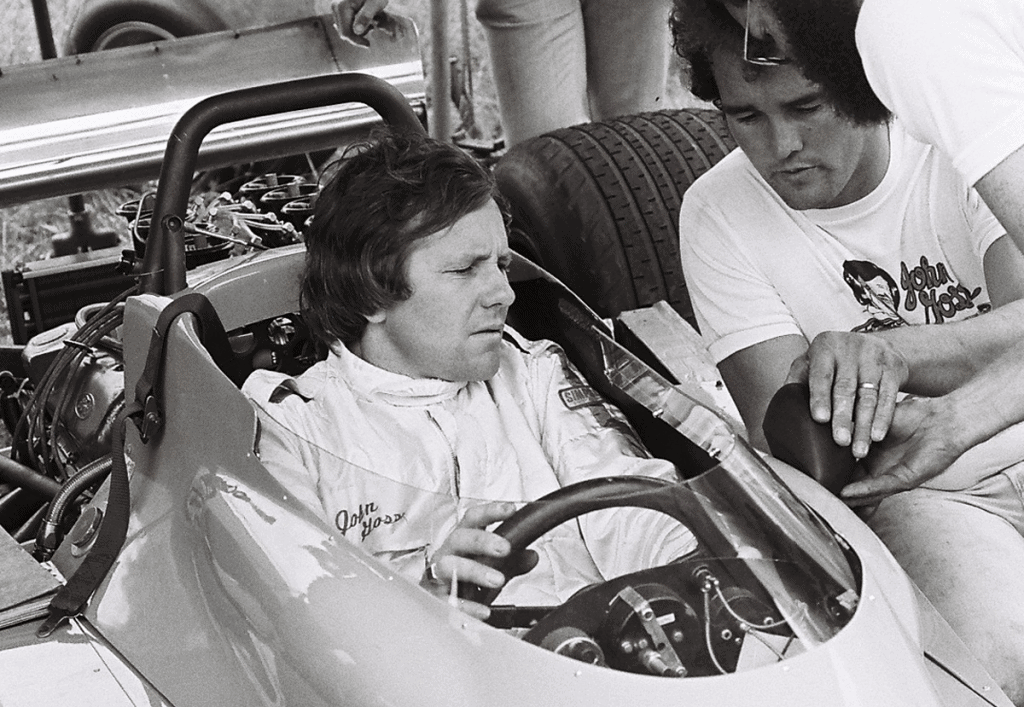 The two-time Australian Grand Prix winner would become a mentor and source of inspiration to Goss, and through a deal facilitated by Matich and patron Laurie O’Neill, Goss realised his open wheel dream in 1974 by stepping up to Formula 5000 with a Matich A53-Repco Holden.

With no open wheel racing experience and having essentially prepared the Matich himself, Goss qualified fifth on debut at Oran Park and finished a pair of races in sixth and fourth respectively.

After a famous Bathurst 1000 victory alongside fellow F5000 driver Kevin Bartlett in 1974, Goss earnt his stripes in the open wheel ranks during the 1975 Tasman Series, where he won the final round – and last ever Tasman Series race – at Sandown.

Goss triumphed over champion-elect Warwick Brown in a charging drive that the Australian Competition Yearbook referred to as “the race of Goss’ life, hounding Brown to the extent the Tasman champ had to pit for fuel”. 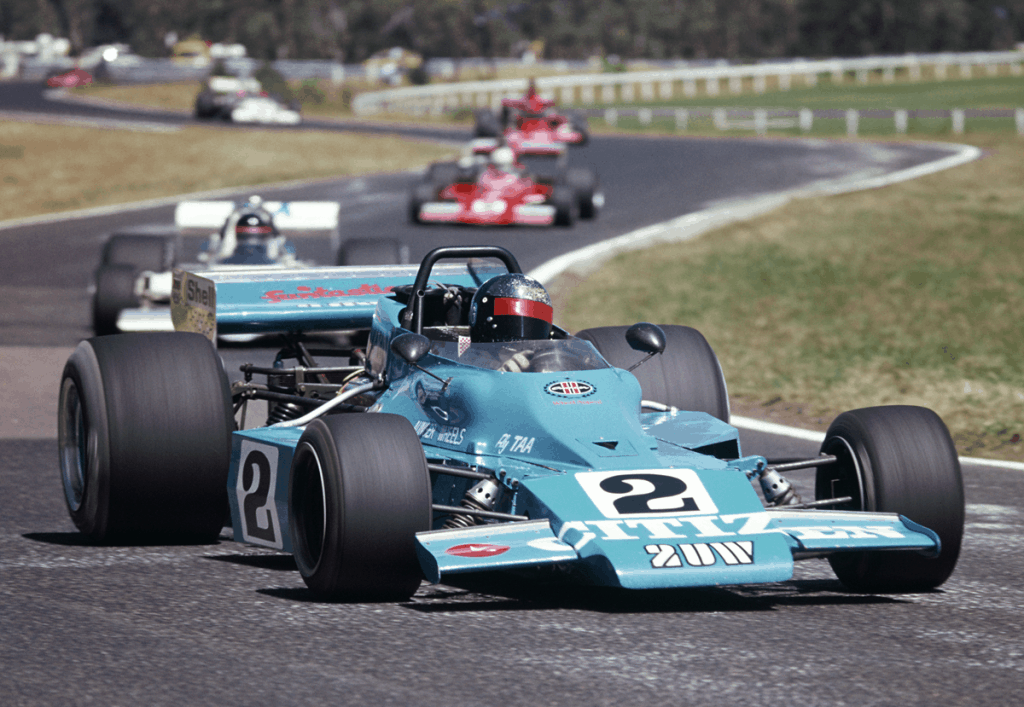 The following year, Sandown was the scene for another momentous day in Goss’ racing career, when the Victorian native won the 41st Australian Grand Prix.

Starting from the second row of the grid, Goss lost ground to the leading pair of Max Stewart and Vern Schuppan in the early laps but later hauled his way into contention, taking the lead when Stewart was slowed by engine issues. After 47 intense laps, Goss held on to win the Grand Prix in a grandstand finish with Schuppan tucked in the Matich’s slipstream.

Of great significance given the relationship between Matich and Goss, it was the last victory in top-line open wheel racing for the Sydney constructor. Also, not only had Goss emulated his mentor by winning the Australian Grand Prix, but he and Matich remain the only drivers in history to have won the race in an Australian car powered by an Australian (Repco-Holden) engine.

Enterprising and PR-savvy, Goss enjoyed the backing of numerous industry-leading brands including Citizen Watches, radio station 2UW, Shell and Pan-Am Airlines. He was also responsible for importing four-time Le Mans 24 Hour winner Henri Pescarolo to race in Australia, including in a one-off F5000 start at Calder in 1977.

Goss continued to race into the 1980s, winning a second Bathurst 1000 title with Tom Walkinshaw Racing’s factory Jaguar team in 1985. His last professional race start came in a brief return to motorsport in the 1995 Sandown 500.

Today, Goss lives in Balmain, NSW and is actively involved in high-end marine engineering projects which keep the racing legend as busy as ever. 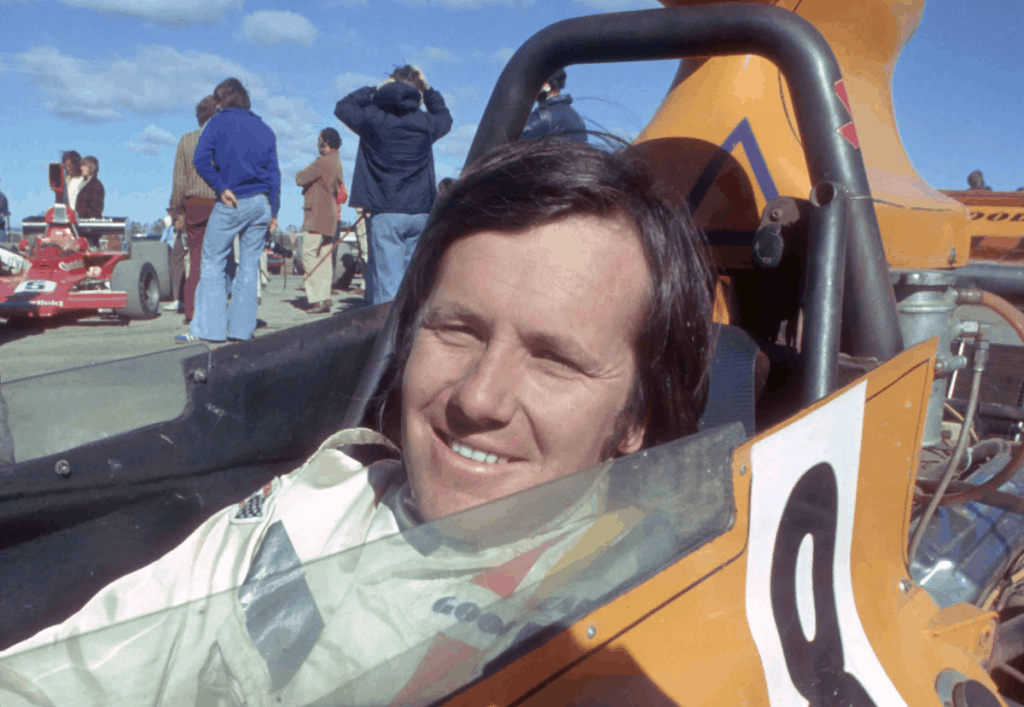