Between 1980 and 1983, Costanzo won the Australian Drivers’ Championship and CAMS Gold Star four times in succession, equalling Bib Stillwell as the only other four-time champion in the title’s history.

‘Alfie’ was a genuine star of his era and a hero to many. He was a multiple champion and the fastest driver in Australia’s fastest racing cars, who commanded the respect of his competitors for not only being tough to beat, but a pure and sporting racer.

Small in stature but big in heart, Costanzo exuded Italian charm and affability that made him one of the top personalities in the sport, and his success drew adoration among many compatriots in the Italian community.

Born in Calabria on January 3, 1943, Costanzo’s upbringing was literally a world away from those of the Aussies and Kiwis he would later race in Formula 5000, for Costanzo grew up in a small Italian village where cars were rare to non-existent. 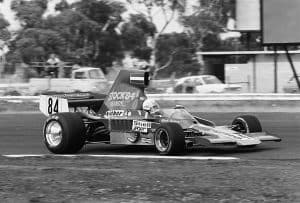 Costanzo was exposed to rally events on the streets of his hometown later in childhood, and had a passion for automobiles by the time he and his family migrated to Australia in 1957.

The Melbourne suburb of Fitzroy North became Costanzo’s new home, and it was on the racetracks of Victoria that Costanzo began racing in 1964 with a Lotus 20 open wheeler.

Costanzo’s initiation to motorsport was as character building as can be expected for a young migrant with little command of English, modest funds and an understanding of racecar preparation that was self-developed.

Mechanical issues and financial setbacks were frequent in Costanzo’s early career, but they were not greater than the remarkable perseverance of the Calabrian who pushed hard enough, long enough for his speed and ability to eventually come to the fore.

With the blessing of loyal and loving wife Adelina, Costanzo made the commitment to purchase a new racecar – a 1500cc Elfin Mono Formula 2 – with which he first entered the Australian Drivers’ Championship in 1968. Costanzo’s team was a true privateer band of enthusiastic family and friends, most notably brother-in-law and main mechanic, Marino Ciufetelli.

Costanzo won numerous races and titles in small capacity open wheelers and won accolades for being the first local driver home in the Warwick Farm round of the 1968 Tasman Series, behind seven Grand Prix stars of the era led by Jim Clark. 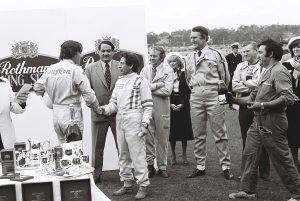 After finishing runner-up in the 1975 Australian Formula 2 Championship, Costanzo and Ciufetelli progressed to the premier formula of F5000 with a privately-run Lola T332-Chevrolet, backed by the local arm of Italian liquor brand, Stock 84. Costanzo became a Gold Star race winner in the final round of the 1976 ADC at Phillip Island.

In the late 1970s, the hard-trying Costanzo received the break that would define his racing career – from the unexpected hands of one of his F5000 competitors.

Accomplished driver and Porsche Cars Australia distributor, Alan Hamilton, was racing against Costanzo in the 1978 Australian Grand Prix at Sandown when he crashed out of the race in a car-destroying, high speed impact.

Sadly, Hamilton sustained lasting health effects in the accident which would preclude him from holding a competition license. No longer able to compete himself in F5000, the affluent Hamilton turned his interest – and patronage – to Costanzo, whom he highly respected.

After years of toiling as a self-funded privateer, Costanzo thrived on the opportunity to race for Hamilton’s professional Porsche Cars Australia operation. Armed with a newer Lola T430, Costanzo repaid the commitment of his patron from the outset by winning on debut for Hamilton in the Sandown round of the 1979 Rothmans International Series.

That result set the tone for a glorious period beginning with Costanzo’s maiden Gold Star success in 1980, achieved in style at the high-profile Australian Grand Prix at Calder where Costanzo finished fourth behind Formula 1 aces Alan Jones, Bruno Giacomelli and Didier Pironi.

The Hamilton-Costanzo alliance unleashed a new weapon to mount its Gold Star defence in 1981 – a new McLaren M26 chassis previously raced by James Hunt in the 1978 Formula 1 World Championship. The season duly yielded a second Gold Star and the fastest ever lap of the original Sandown circuit, recorded by Costanzo in a virtuoso display.

The arrival of the 1.6-litre Formula Pacific category in 1982 presented a new challenge for Hamilton and Costanzo, which they again rose to by winning the first two Gold Stars (1982, ’83) of the Formula Pacific era. Notably, they did so with a Tiga chassis which was relatively unfancied and outnumbered against the ubiquitous Ralt RT4s of their opposition.

Although Costanzo never pursued Formula 1, Hamilton believed his driver would unquestionably have been competitive had he raced on the world stage. Costanzo’s performances against Formula 1 pedigree drivers in F5000 and Formula Pacific suggest that could well have been the case. 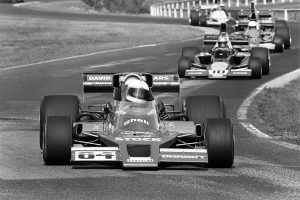 Costanzo last competed at a national level in 1998 and returned to racing in the mid-2010s, reuniting with Hamilton to drive the latter’s McLaren M10B F5000 in historic events.