The first repeat visit to a circuit by the VHT S5000 Australian Drivers’ Championship will see the third round of the 2021 Gold Star title race return to Sandown this weekend.

Supporting the Repco Supercars Championship for the first time, the Sandown SuperSprint event will see a busy program with seven on-track sessions spread across two days this weekend.

Two practice sessions and qualifying will be held on Saturday before three quickfire races are staged on Sunday.

Every session will be broadcast live on Fox Sports 506 and the Kayo Sports streaming service this weekend.

Sandown was the scene of the historic first ever S5000 event, when the circuit hosted a non-championship event in September that year.

Formula 1 star Rubens Barrichello was a star addition to the field that included Matthew Brabham, John Martin and Will Brown, among others.

Martin edged out Tim Macrow for pole position by 0.013s with a 1m05.1270s best in qualifying, before Macrow reversed the order to take the series first ever race win later on Saturday afternoon, Martin second and James Golding third.

Golding subsequently beat Macrow and Martin in the second heat race, while the latter set the new Sandown outright lap record thanks to his 1m04.5533s best – a benchmark that stands to this day.

The feature race was claimed by Golding over Barrichello and Martin after being cut short to just seven laps following a crash involving Alex Davison on the back straight.

S5000s inaugural visit to the historic Sandown circuit would set the tone for the championship proper to commence.

As well as Sandown, S5000 cars now also hold the outright lap record at Symmons Plains Raceway in Tasmania, with 18 months of solid development set to push lap times even lower this weekend on the series’ return to the popular suburban Melbourne venue.

The Victorian venue has a lengthy Australian Drivers’ Championship / Gold Star history and has hosted Australia’s premier open-wheel award 38 times, for a total of 51 races.

The first Gold Star race held at Sandown was won by Lex Davison, driving a Ferrari 500, in September 1962.

The VHT S5000 Australian Drivers’ Championship field will this weekend compete for the John Bowe trophy, named after the two-time Gold Star winner.

Alfie Costanzo holds the record for the most Australian Drivers’ Championship victories at Sandown, with 5. 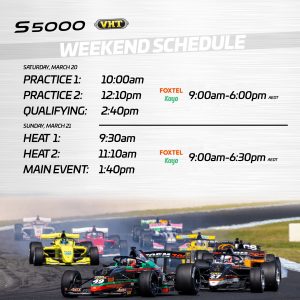