The long and storied history of the Gold Star

THE VHT S5000 Australian Drivers’ Championship will be decided at Sydney Motorsport Park next week, with one of six drivers to be crowned ‘Australia’s champion driver’ for the 59th time and be presented with the coveted Motorsport Australia Gold Star award.

The actual genesis of how the prize of a ‘Gold Star’ came to be awarded to Australia’s Champion Driver – the top racer in the top formula of open-wheel racing – came to be is somewhat unclear, but its naming is linked to a similar award long established in the United Kingdom.

The British Racing Drivers club inaugurated their own Gold Star in 1928 to recognise outstanding achievement by their own members in motor sport competition around the world, including Grand Prix racing, land speed records and endurance racing disciplines.

The Australian version came from the same concept; award Australia’s top driver which, in the 1950s, was not someone racing tin tops: This was an open-wheel award.

The first Gold Star was awarded to the 1957 Australian Drivers Champion Lex Davison, who won the title by sweeping six of the nine rounds, including the Australian Grand Prix at the Caversham circuit in West Australia.

The first seven seasons of the Gold Star were contested under the broad banner of ‘Formula Libre’, however a majority of cars were essentially the same as Formula 1 cars competing in the World Championship – Davison winning in a Ferrari 500 while Stan Jones won the 1958 championship in a Maserati 250F.

Early champions included some of the most famous names in Australian open-wheel racing; Len Lukey, Alec Mildren, Bill Patterson and Bib Stillwell, who won his first two titles in the final two years of the Formula Libre era.

CAMS (now Motorsport Australia) introduced new regulations in 1964, dubbed the Australian National Formula that tightened regulations but maintained many of the same cars. Brabham dominated this era, the famous marque winning the first two titles run under the ANF regulations with Bib Stillwell behind the wheel. His four-straight titles would only ever be matched by one driver.

Spencer Martin won his two titles driving a Brabham BT11 before in 1968 Kevin Bartlett burst onto the scene, taking his first title and backing it up a year later in the first year of a new regulation set. 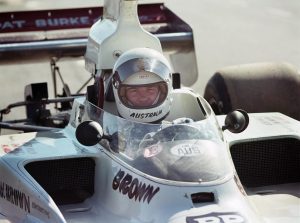 Australian Formula 1 was introduced in 1969 and began as essentially a rebrand of the previous Australian National Formula. However, a year later the regulations changed to allow 5.0-litre production based engines and, as such, the iconic Formula 5000 era was born.

If there’s an era where the Gold Star and Australian Drivers Championship can be considered at its peak – or at least most famous – it was this one.

This was the era of the ‘big banger’ cars and famous names: Bartlett, Leo Geoghegan, Frank Matich, John McCormack and the legendary Alfredo Costanzo the biggest; Matich, Elfin, Lola and McLaren the significant constructors.

F5000’s reign at the top ended in 1983, when ‘AF1’ replaced by smaller-capacity cars running to the Formula Pacific regulations.

Regardless of the era, Costanzo was king of the early 1980s in Aussie open-wheel racing. He defeated Jon Davison and John Bowe to win the 1980 title in a Lola T430,  won the shortened ’81 series at a canter and then when the regulations changed in 1982 he edged out a hotshot young-gun from Tasmania named John Bowe to win the title by four points.

In 1983 he won four of the six rounds aboard a Tiga FA81 Ford to beat John Smith and Andrew Miedecke to the crown, his fourth.

A FORMAL rule change in 1984 saw the international Formula Mondial – Formula Atlantic in the  United States – adopted. The Ralt RT4 was the car to have and John Bowe the star to beat.

The Tasmanian injected himself into the national landscape by winning the ’84 and ’85 titles – beating the great Costanzo in the first year and Peter Hopwood a year later.

Bowe’s shift to Touring Cars with Volvo opened up the field in 1986, with Graham Watson’s Ralt beating Hopwood’s similar car to the title – however tougher times were ahead for the storied prize.

The focus had shifted away from open wheel racing and as a result, interest was dwindling.

The 1987 championship was contested over just a single race, held as a key support act to the Australian Grand Prix in Adelaide that November. David Brabham won, edging out Rohan Onslow and Mark Mclaughlin in a 15-lap race run for Formula Two cars.

A six-round series was held for F2 cars the following year – won by Onslow – but change was in the wind and a new Australian-based category was in the pipeline.

THE AUSSIE Formula Holden class was introduced in 1988 and assumed the mantle of Australia’s top open wheel category. Though it took a few years to grow, the subsequent era would complete a transition of the category to a place where young drivers gained their racing stripes before progressing to a Touring Car career, or overseas.

Simon Kane won his first and only title in 1990 however it was young Mark Skaife who was making people pay attention – he finished third on his wings and slicks debut and but a year later would win his first title while at the same time racing as a factory Nissan pilot in Touring Car competition.

Skaife became the first person to win the Australian Drivers Championship and Australian Touring Car Championship in the same year when he won both titles in 1992, before backing it up with a third crown in ’93 – his last in the category – after a series of battles with Mark Larkham.

Paul Stokell beat Greg Murphy to the ’94 crown – the first for the storied Birrana Racing team from South Australia. It would not be their last – Birrana won again in 1995 and ’96 with Stokell who matched Skaife’s triple titles.

1997 was the year of the young-guns; Bright, Bargwanna and a young kiwi named Scott Dixon locking out the top three. Dixon won the title the following year and within two seasons was in an Indy Car in America and the rest, as they say, is history.

Back-to-back titles for Simon Wills followed as Birrana returned to the top, their six titles standing as the most by a single team to that point.

Rick Kelly made it seven for the team a year later in a Holden-backed entry, while Will Power’s 2002 title helped his aspirations of an international career which, as we know, has turned out rather well.

The series was rebranded Formula 4000 the following year but was in decline; Daniel Gaunt and Neil McFadyen won the last two titles in the category and while the ‘Formula Holden’ everyone knew would continue, the Gold Star was going elsewhere.

Ben Clucas became the first international – as in, not from Australia or New Zealand – to win the Gold Star in 2006.

In 2007, Leanne Tander helped celebrate the 50th anniversary of the award by becoming the first female driver to win a race in the history of the Australian Drivers Championship, though missed out on the title in a thrilling battle that ultimately went to Tim Macrow.

The F3 era was highlighted by competitive title battles and a host of international imports making their mark: James Winslow won in 2008, Joey Foster in 2009 and Ben Barker a thrilling title in 2010, beating his teammate Mitch Evans by a single point on account of setting the fastest lap in the final race of the title year at Sandown.

Simon Hodge’s final title in 2014 – a record seventh for Adelaide squad Team BRM – was the last for the award in its continuous run: Mid way through the 2015 title race CAMS ‘parked’ the award and an unbroken 58-year streak of awarding Australia’s top open wheel driver came to a premature end.

AUSTRALIA’S newest wings and slicks category ushered in a new era for Australia’s premier award this year when it was confirmed the winner would receive the Gold Star, following a seven year hiatus.

The 2021 champion will be the 59th winner of the prestigious award, the winner to join – or re-join – a list of elite names and etch his name into the record books.